A long journey but worth it

After many months of planning we arrived safely in San Francisco at about 5pm local time, which was 3am British time. We were all feeling a little weary, but once we’d got to the hotel and checked in we decided to keep going until a “normal” bedtime.

Our first venture out was to Fisherman’s Wharf (all down hill). We had a wander round, then called at Boudin for something to eat. I had soup in a roll (soup and a roll will never be the same again). By this time we had reached our tiredness limit and walked back up to he hotel. Obviously this was all up hill, and boy are they big hills! However we made it all the way back, with a slight detour due to tiredness and poor map reading skills.

We were staying at the Fairmont, which is quite a swanky hotel. It is a bit old-worldly and reminds me of the hotels you see in black and white films. After a lovely warm shower, I got into what felt like the worlds comfiest bed and slept until 6am 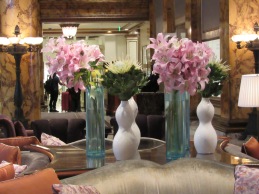 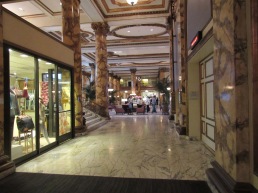 Our first day started with the sun shining and with a walk in the opposite direction towards Union Square, calling in for breakfast at The Cable Car Cafe. The food was great. I had scrambled eggs, potatoes and toast and a lovely cup of tea.

Our next stop was to pick up The Big Bus Tour at Union Square. The tour took about 2 1/2 hours and covers a large area of San Francisco with a pre recorded commentary. There was so much to see. Of course we sat on the open top of the bus. It was initially warm but going overGolden Gate Bridge the wind picked up and it was decidedly chilly. However we braved it and it was worth it to see all the amazing sites on offer.

There are some very pretty areas and some interesting sites Golden Gate Park, Golden Gate Bridge and the hippy area are great to see.

However, here like most major cities there is a massive divide between the rich and poor. The many homeless wander pushing their trollies but not really bothering anyone. It certainly makes you appreciate how lucky you are.

After the bus tour we alked along pier 39, which was bustling with people and the sun was out. There are some great quirky shops and eateries and a combination of tempting smells.

The seals that lay in the sun at pier 39 are amusing to watch. I knew that they had seals there, but didn’t appreciate how many there would be.

Our next stop was another walk to the top of Lombard Street which then leads to the curviest steepest street you will ever see. It’s great for a photo opportunity and to watch the drivers making their way down the hill slowly. I for one was glad that I was walking down not driving.

At this point hunger was calling and we stopped at a lovely bar called Jack’s Cannery Bar. Sitting out in the sunshine having a cold drink and a crab salad chatting and a thing the world go by- You can’t beat it!

Our evening took us back on The Big Bus for the evening tour. It was breezy and cold, but we expected that so we’re well prepared. This tour took us over Bay Bridge to Treasure Island and around some of the sites that we had seen during the day.

It was quite good, but as it was still daylight we didn’t get to see the city at night with all the lovely twinkly lights like I thought we would. Perhaps I  underestimated how late it would be when it came dark.

Our day ended in Louie’s Diner near Union Square. We were going to go to The Cheescake Factory but it was packed. The Diner was a 50’s style, like you see in the films and the food was great, so not at all disappointed that we didn’t make the Cheescake Factory.

After a warm bath I got into bed feeling that I’d had a great day. I’d walked 30000 steps and the equivalent of 139 flights of stairs!

Oh and by the way one site I never expected to see on the bay – naked cyclists. A group of middle aged, pale men Apparently it’s legal in California as long as you are wearing one item of clothing. Which explains why one was wearing socks and one was wearing a mask. I didn’t look for long enough to see what the others were wearing!! 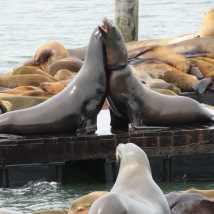 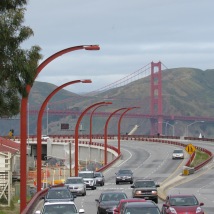 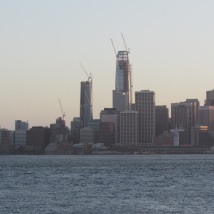 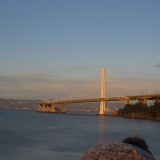 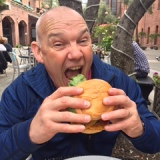 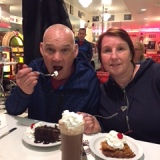 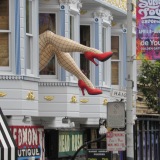