Life is a Cabaret

On Friday evening I went with a couple of friends to see Cabaret at Leeds Grand Theatre. I have only ever seen the film version before. My eldest daughter had seen the stage version a few years ago and had been really impressed by it, so I thought I’d give it a whirl (Mum, it was amazing… you have to see it!)

The production was excellent and I really enjoyed the show. All the performers were amazing, particularly Will Young and Louise Redknapp. The ensemble were pretty stunning too and showed off some impressive dance talent. I hadn’t told either of my friends anything about it, as I didn’t want to spoil it.

The first half is pretty crazy, set in Berlin, mainly centred around the Kit Kat Klub and its eccentric performers. It’s definitely not for those who are easily offended, but does a really good job at getting the point across.

One of my friends wasn’t really sure whether she liked it or not. However during the second half, the mood changes as the Nazis start to make their presence known, culminating in a pretty shocking ending (even though my daughter had told me about it, I wasn’t really prepared for how gobsmacked I would be).

All in all it was a great show. It wouldn’t be on my list of must see again, but I’m definitely glad that I went to see it. In this age where tolerance (or lack of it) is in the news all the time, it certainly makes you think about how we treat others who don’t necessarily fit in with our ideas of what is “normal” or acceptable.

On a lighter note

On Sunday I was invited to my niece’s baby shower. I’ve never been to a baby shower before. They weren’t really around when me and my friends had our babies. If I’m honest I wasn’t really sure what the purpose was, or what would be expected of me, whether I should buy a gift now or later, or both?!

My youngest daughter and I went along to the baby shower, armed with cup cakes with blue icing and appropriate “it’s a boy” toppers. I didn’t really want to take a present for the baby as I want to do this when he is born. I know this is probably an old fashioned view, but that’s just me. We did however take her a little present, just for her, rather than baby.

To be honest it was a really lovely afternoon. It was nice to see everyone and catch up and it was particularly good to see my lovely niece looking so well and clearly enjoying being pregnant.

On the way home my daughter said that it was probably the last time we would all be together for a while, as once she has the baby she won’t want everyone there at once (Sometimes she speaks a lot of sense). I guess that this is one of the purposes of the baby shower, a chance for us to be together, to celebrate her pregnancy and wish her well, rather than everyone turning up within a week of her having the baby, when she is just getting settled with her new family. 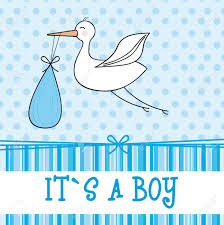