Yesterday I sadly said goodbye to my lovely friend Sarah, who lost her fight with breast cancer. Throughout her illness Sarah remained positive, determined to live her life to the full, provide for her family and to have no regrets. She was a shining example to all those who knew her and will be missed by so many people. So this is my tribute to Sarah, an amazingly beautiful and brave friend.

Sarah and I had been colleagues for some time, working within the same department, never working on the same team, but passing the time of day, chatting whilst we worked and occasionally working on an enquiry together.

Then, a supervisor made a decision that would change both our lives forever. The teams were shuffled around and Sarah and I began working together on a day to day basis. We were both a bit put out at first, not because we didn’t like each other, or couldn’t work together, but because we were both quite happy on our own teams, we had our own friends, but we decided to make the best of it and crack on with our work.

I am eternally grateful for that decision. Working with Sarah brought us closer and we soon realised that we had quite a lot of things in common, crafting, reading, musicals travelling, amongst other things, but we also had the same ethics. We both valued family life, knew how important our friends were and were both determined in our work to provide the best service that we possibly could to some of the most vulnerable people in society.

When the teams were re-shuffled, Sarah and I continued to be firm friends both in and out of work. We were able to talk about anything, had some amazing experiences and supported each other through some really difficult times.

Sarah was diagnosed with breast cancer when she was called for an early mammogram due to a trial in the local health authority. She had no symptoms at all, but it was discovered that her cancer was already well developed and she was swiftly taken into hospital for a mastectomy, followed by gruelling rounds of chemotherapy. Although Sarah knew that her cancer was incurable, she certainly didn’t take that lying down. She did this without complaining, always smiling and having a firm belief that when one treatment wasn’t working, there would be another one that would.

She was determined to live her life to the full and no matter how ill she was she always had time for her family and friends. She cared for both her girls and her mum, despite being exhausted some days. She told me often that she was not afraid of dying, but was always concerned about the effect that her death would have on other people. She was reluctant to let people know when she was suffering and always had a goal to work towards.

Sometimes there were tears, when she was clearly worried, particularly in relation to her two daughters, but generally when you asked her how she was she would say that she was doing alright.

The hardest time was a few weeks ago, when her treatment was stopped and she knew that there was nothing else that could be done. She was initially rocked by the news, but again set about making plans for her family, dealing with unfinished business and trying to make things as easy as she could for those around her.

Sarah never stopped fighting and was determined to keep active for as long as possible and it was only in the last few days of her life that she was unable to do this. She was able to be cared for at home and spend the time that she had left with her family and close friends. I feel blessed to have been able to spend time with her, not only in the last few weeks, but over the last few years. I am also really grateful to her family for allowing me to be there and to the other friends who have given unending support.

A lesson in living a good life

I have learned a lot from being friends with Sarah. Mostly that you should live a good life, not waste time complaining about the things that life throws at you, but to accept those things and do all the things you want to do anyway.

It is true that none of us know how long we have left with our family and friends. Sarah taught me that it’s important to make each moment count. Take pleasure in the little things. Make goals for your life, no matter how small they are. Don’t let small things grow into big problems and don’t put off things that you really want to do. Try not to bear a grudge and remember that a small  kindness can be a huge thing to someone else.

I am definitely a better person for knowing Sarah and I hope that some of her kindness and selflessness has rubbed off on me.

I didn’t want to end this blog on a sad note as Sarah would definitely not approve of that. Everyone that knew her will have their own memories, from nights out, lunches at the Ivy, theatre trips, Christmas do’s and many other celebrations. There are so many memories, some of which I talked about in my previous blogs,  but here are just a couple of my favourites

Sarah wanted to raise money for Breast Cancer Care and talked myself and Sharon into taking part in the moonwalk. This was a 26 mile walk, through London, in the middle of the night, wearing a decorated bra. This was a tough but amazing experience. Sarah encouraged us around the whole 26 miles, never losing her enthusiasm. When we reached the finishing line the following morning, Sarah was the only one out of all three of us that was still able to walk around. It was through this experience on the night and the training before hand that I got to know Sharon and we have been able to support each other and I hope we will continue to do so in the future.

In February this year Sarah and I went on an overnight stay to a spa. We had a lovely relaxing couple of days in some very luxurious surroundings. We were able to spend some quality time together, talked, laughed and cried. As Sarah was feeling quite tired at this stage, we weren’t exactly party animals and ended up tucked up in bed at 9pm, with a bottle of prosecco, watching Love Island.

I know that it will be hard over the coming weeks,  months  and years as we will all miss Sarah so much, but I will do my best to remember the good times, to focus on the laughter rather than the tears and to live the best life that I can. 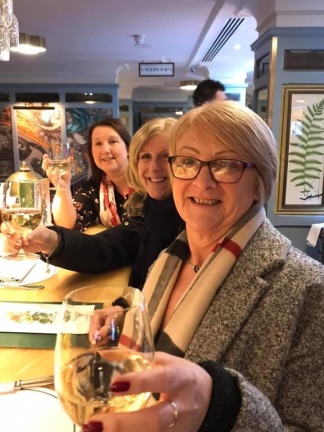 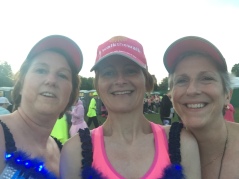 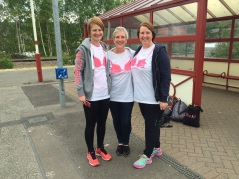 I will look for you in the colours of the rainbow, the brightest star and the prettiest snowflakes.

3 thoughts on “Sarah, My Friend”