Our journey continued yesterday through the lovely countryside at a lovely steady pace. The weather was a little mor overcast and cooler, but it still stayed fine, so we were really lucky.

At the first lock we came across a couple of geese and their goslings that had got themselves stuck in th lock. My husband opened the gate and managed to gently shoo them along whilst someone on another boat tempted them with cornflakes. Luckily they all managed to get out of the lock safely.

We moored for the night at Fradley junction, where there were lots of boats moored up. The area is really pretty and we ate at the Swan Public House (aka The Mucky Duck) which is apparently the most photographed pub on the canal.  It was motorbike meet night, so there were loads of bikes and bikers outside. By this time the sun had finally come out and it was a beautiful evening. 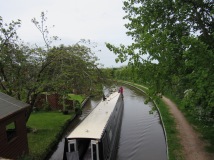 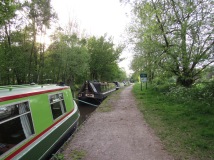 On a go slow

This morning dawned bright and sunny again. We had to start the day by going through the swing bridge and lock at Fradley Junction. There were a number of boats waiting to go through the locks, so it took much longer than expected.

There were some volunteers helping at the locks, who were mostly friendly and helpful, however one of them was slightly condescending and proceeded to explain how to work the locks. Although I said that I had done plenty of locks before, he insisted on explaining step by step quoting the official health and safety regulations along the way. I managed to keep my cool and thanked him for his help before moving on to the next lock.

Me and my husband walked for quite a way over the next hour or so and were surprised when our friends didn’t turn up for quite a while. Eventually they turned up behind a a boat that was moving very slowly. We hopped back on the boat and before long there were three boats stuck behind the go slow. We asked him to move over, but he seemed oblivious and just kept pottering along. Eventually after explaining that he was going too slow and there was a queue of boats behind him, he pulled over to let us past. Unfortunately he wouldn’t let the others pull past him and they had to stay behind him for some time.

Later in the day at the locks and mooring point, we chatted to several people who had got stuck behind him in the course of the day. He had clearly caused chaos on the canal!

We moored up at Shugborough for the night. The sun was still shining and we walked to the farm shop where we bought supplies for the next day and had a coffee and cake at the cafe. It was then back to the boat for a cheeky prosecco before showering and going to the pub for tea. Another amazing day. 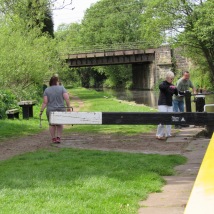