Our final leg of the canal journey took us through beautiful countryside, with glorious sunshine.

Friday started off with a gentle mist rolling down the canal. The sun was out and the sky was a clear blue. Other than the birds singing there was hardly a noise. It was so quiet in fact that when a hot air balloon passed overhead you could actually hear it. I live in a town, near a road and it is unknown for it to be so quiet.

There were fewer locks today, but the ones we passed through were very pretty and well kept. We moored up at Penkbridge, where we had a lovely meal at the Littleton pub, which was a short walk into town.

On Saturday we were up early as we had to make our way through the last few locks before returning our boat. We had a short stop off for breakfast before heading off home. 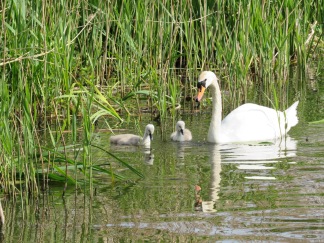 An American in Paris

Most of the weekend was spent washing and sorting out after our holiday. The weather was still beautiful, so we had all the garden furniture out and washed that too.

Later, on Sunday afternoon, I had booked to go to the cinema, to see An American in Paris, which had been filmed from the stage show. It was absolutely amazing!

The singing and dancing by all the cast was superb. It was a really great end to what has been a wonderful week.